Dr. Marie desJardins is the Dean of the College of Organizational, Computational, and Information Sciences. In this role she will lead collaboration among faculty and other stakeholders in pursuing the growth and development of College programs and initiatives, align an interdisciplinary collaboration that increases pathways from undergraduate to graduate study in growing fields, and promote a culture of research and scholarly productivity through innovative teaching and engaged learning. 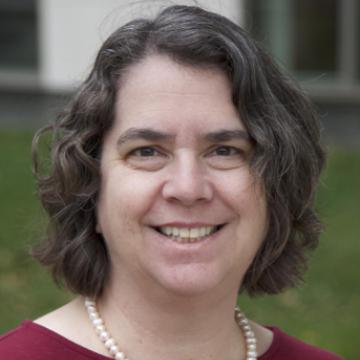 Dr. Marie desJardins joined Simmons University as the Dean of the College of Organizational, Computational, and Information Sciences in 2018. Previously, she was a member of the computer science faculty at the University of Maryland, Baltimore County, from 2001 to 2018, most recently as the Associate Dean for Academic Affairs in the College of Engineering and Information Technology. Before joining the faculty at UMBC, she was a Senior Computer Scientist at SRI International. She earned her A.B. in Engineering from Harvard University and her Ph.D. in Computer Science from the University of California, Berkeley.

Her research is in artificial intelligence, focusing on the areas of machine learning, multi-agent systems, decision making, and interactive AI. She was named one of the "Ten AI Researchers to Follow on Twitter" by TechRepublic and one of "14 Women in AI You Should Follow on Twitter" by craigconnects. She has published over 135 scientific papers on AI and CS education, and has been PI or co-PI on nearly $12,000,000 of external research funding, including a prestigious NSF CAREER Award. She has mentored 13 PhD students, 27 MS students, and nearly 100 undergraduate researchers. She is known on campus and throughout her professional community for her dedication to mentoring, diversity, outreach, and innovative educational practices.

Dr. desJardins is a Fellow of the Association for the Advancement of Artificial Intelligence (AAAI) and a Distinguished Member of the Association for Computing Machinery (ACM). She is a recipient of the Distinguished Alumni Award in Computer Science from UC Berkeley; the A. Richard Newton Educator ABIE Award from the Anita Borg Institute; the NCWIT Undergraduate Research Mentoring Award; and the CRA Undergraduate Research Mentoring Award. She was the 2014-2017 UMBC Distinguished Teaching Professor, was an inaugural UMBC Hrabowski Innovation Fellow, and was named one of UMBC's ten "Professors Not to Miss" in 2011.

Dr. desJardins is known nationally for her support of and commitment to improving student diversity, access, and quality of computer science courses at the high school level, and received multiple NSF awards to support her efforts in this area. She was the lead PI on the NSF-sponsored "CS Matters in Maryland" project, which created curriculum and trained high school teachers to teach the AP CS Principles course. She built a statewide coalition in Maryland to increase access to K-12 CS education, with a focus on inclusion and diversity, and cofounded the Maryland Center for Computing Education, which received $5,000,000 in state funding for teacher preparation and advocacy. She was the Maryland team leader for the Exploring Computing Education Pathways (ECEP) Alliance and a founding member of the Maryland chapter of the Computer Science Teachers Association.