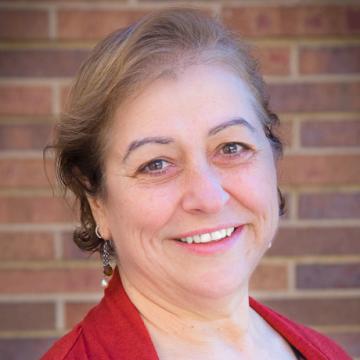 As an undergraduate at Mount Holyoke College (BA '81) Cathie Mercier was drawn to the scientific emphasis and empiricism of experimental psychology. A psychology major, she did not take her first course in children's literature until her senior year. "Like Alice, I fell down the rabbit hole and I've yet to come up," said Mercier.

Cathie brought the taut writing style and analytical sensibility required of psychology to the study of literature for children and young adults. She completed her Master of Arts degree in Children's Literature in 1984; in 1993 she earned a Master of Philosophy in English at Simmons as a steppingstone to her doctoral studies. She completed her Ph.D. in the University Professors Program at Boston University ('02) where she wrote about the confluence of social movements and images of the child in American picturebooks. She holds a Ph.D. in Children's Literature.

Cathie was appointed to Simmons in 1985 and has been teaching in the graduate degree program in children's literature ever since. She teaches criticism, contemporary young adult realism, the child in fiction, the picturebook and a survey course. Her thesis, independent study, and internship advising embrace a wide range of topics, from a cultural analysis of Printz titles to an annotated bibliography of historical fiction for curricular use. "As advisor of a thesis that asked, 'What can queer theory tell children's literature?' I met regularly with the student to discuss ideas. We both learned from the books, and I hope she learned from me. But I consider it my best teaching experience because of how very much I learned from her," said Mercier, who was thrilled when part of her student's thesis was included in a book of new voices in children's literary criticism.

In the undergraduate curriculum, she taught children's literature as a key focus in her honors seminar titled "Stories of Childhood," a course that was part of a learning community that paired with Economics professor Niloufer Sohrabji's course "Stories of Democracy." She won the Dean's Award for Excellence in Academic Advising.

At Simmons, Cathie has served in a variety of administrative roles. Currently, she directs the Center for the Study of Children's Literature,the graduate degree programs in the Master of Arts in Children's Literature, the Master of Fine Arts in Writing for Children (on-campus and at The Eric Carle Museum of Picture Book Art in Amherst, MA), and dual degree programs that combine the MA with degrees in library science, or teaching, or writing for children.

Cathie has been contributed to the journal Children's Literature and to The Horn Book Magazine. Her skill at "close reading, an ability to talk about books so that others see the book at its most ambitious and complex, and a talent for collaboration" have made her a valuable member of national book award committee.  She currently serves on the Subaru Prize Committee of the American Association for the Advancement of Sciences/ Young Adult Division.

Cathie completed her third study of an important young adult author with co-writer Susan Bloom; it also marks their third book with editor Patty Campbell.  Russell Freedman was published in 2009 by Scarecrow Press and will be the first book at Scarecrow to focus on nonfiction. Prior collaborations are Presenting Avi and Presenting Zibby Oneal. These books and their audience of teachers, librarians, and young adults fit perfectly into Cathie's driving belief that the "work of the critic is not to 'take apart' a book, but to read well and deeply enough to offer insight and illumination to the text and to oneself." She contributed to Keywords in Children's Literature  and  her current work includes an essay on the 20th Century picturebook and a chapter on pedagogies of teaching young adult realism.

Currently, I am involved in a book-length project tentatively titled WORKING CLASS . The project will draw from many writers for children and young adult and will include original works by authors and illustrators. The driving theme attends to the ways in which literature for children and young adults address (or does not address) issues of class.