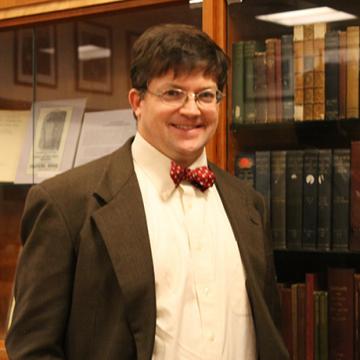 I attended Vanderbilt University where I double majored in History and Fine Arts earning the Bachelor of Arts and later a Masters of Education degrees. I also hold a M.Div. from Reformed Theological Seminary as well as a M.L.I.S. degree from the University of Southern Mississippi. I earned my doctoral degree in the Graduate Program in Religion of Duke University with qualifying exams on colonial America history, the history of religion in America, history of Reformation Europe, and Atlantic World travel literature. My doctoral dissertation, “Seaborne Conversions 1700-1800” examined the role of religion aboard eighteenth-century British sailing vessels crossing the Atlantic.

I have been a member of the History Department at Simmons University in Boston since 2007 where I teach undergraduate and graduate courses in Early American and Atlantic World history. I currently direct the department’s undergraduate program in public history, which means I teach an introductory course on public history that is combined with the history of Boston, a course that focuses on the role of objects in historical understanding, as well as supervising internships at a variety of museums and historic sites in the area. I teach separate graduate and undergraduate courses on the history of the Atlantic World from Columbus to the Haitian Revolution. I normally handle the first half of the American history survey, which covers colonization through reconstruction as well as an African-American history survey course. Finally, I typically teach our department’s core seminar for our undergraduate majors, “Interpreting the Past,” which introduces students to the theory and method of history. As a teacher of the humanities, my two overall goals for students in all of my courses are to be critical thinkers and excellent writers.

My wife Dana and I live in Maynard, Massachusetts with our teenage daughter and son. In my spare time, I enjoy reading and playing board games. In addition to writing about ships, I love sailing, but I know just enough about boats to be a danger to others and myself.

My major goal as a historian of American cultural history is to understand the practice of religion in people’s daily lives as they interacted with one another in societies marked by cultural, socio-economic, racial, and gender difference. My work pursues this overall goal specifically by investigating the cultural encounters and cross-currents in the antebellum South and colonial British Atlantic world, particularly the development of functional religious toleration.

My new research project, which will hopefully lead to a second book, examines how American seamen mediated knowledge of world religions and cultures amidst the rapid changes in nineteenth century America. This research is currently being supported by a joint fellowship of the Boston Athenaeum and the Congregational Library whose excellent archival and print collections are providing a rich foundation for my investigation of early America.

My first book entitled A Path in the Mighty Waters: Shipboard Life and the Atlantic Crossing to the New World is from Yale University Press, January, 2015.