Helen G. Drinan is the eighth President of Simmons University 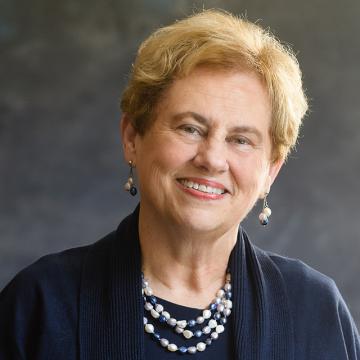 Helen G. Drinan has served as President of Simmons University in Boston since 2008. Under her leadership, Simmons has achieved university status, simplified its academic structure to enhance interdisciplinary study by creating four colleges, completed the largest fundraising campaign in its history ($100 million), welcomed the two largest freshman classes in its history, reconfigured its undergraduate curriculum around leadership development, developed world-class coed online graduate degree programs, and cemented its status as a premier institution for women scholars.

Ms. Drinan is Simmons' eighth president. The twin hallmarks of Ms. Drinan's tenure are fiscal stability and growth, and the unwavering institutional focus on its mission to develop career skills of Simmons students. Prior to being named President, Ms. Drinan served as the Chair of the University's Board of Trustees.

In leading the institution forward, Ms. Drinan has established herself as a national expert on women's education as a pathway to developing successful leaders, with her comments and writings appearing in numerous media outlets including National Public Radio, The Huffington Post, The New York Times, The Boston Globe, and Boston Business Journal. The most recent recognitions for her work on behalf of women's and girls' education and leadership include the Abigail Adams Award from the Massachusetts Women's Political Caucus (2018); Silent Spring Rachel Carson Advocacy Award (2016); the MissionSAFE "Be the Change" Award (2015); Women's Lunch Place Honoree (2014); Strong Women Strong Girls "Phenomenal Woman" (2014); Girl Scouts of Eastern Massachusetts Leading Woman (2013); Woman LEAD "Woman Who Leads in Academia and Inspires Others" (2013); and the Greater Boston Chamber of Commerce Pinnacle Award for Excellence in Arts & Education (2012). Simmons was also named a top 100 women-led business by The Boston Globe in 2016 and 2017.

Ms. Drinan is a member of several organizations dedicated to empowering women including the Advisory Council of the Women in Public Service Project; 2020 Women on Boards, and the Massachusetts Women's Forum.

Ms. Drinan is Chair of the Board of the Association of Independent Colleges and Universities in Massachusetts (AICUM). She is an appointed member of the President's Trust of the Association of American Colleges and Universities (AAC&U), a leadership group of institution presidents committed to advancing liberal education and inclusive excellence for all college students. She was a Founding Member of the Boston College Club, served as a member of the Commonwealth's Court Management Advisory Board, is a past Vice Chair of the Board of Directors of Blue Cross Blue Shield of Massachusetts, and has also served as a member of the Mount Holyoke College Board of Trustees.

Her experience as a Peace Corps volunteer in the Philippines in the early '70s with her husband and two small children provided her with formative multicultural experiences that have influenced her leadership style and sensitivity. President Drinan was one of five prominent Bostonians highlighted in The Boston Globe's "50th Anniversary Peace Corps" feature article.

Another seminal moment for Ms. Drinan was when she was diagnosed with breast cancer in 2014. She chose to make her battle public, using blogs, emails, and media interviews to help reduce the lingering stigma around cancer, and to encourage women and men to stay vigilant about their health. She is keenly interested in the relationship between carcinogens in consumer products and their impact on the incidence of cancer.

An undergraduate alumna of Mount Holyoke College, Ms. Drinan also holds degrees from the Simmons School of Management and School of Library and Information Science. She resides in Boston with her husband, David H. Drinan. They have three grown children and six grandchildren.