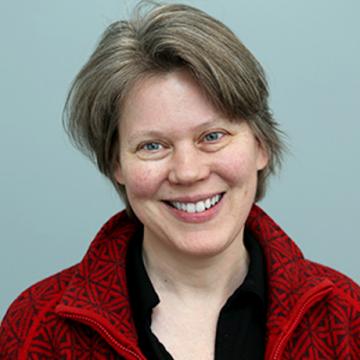 Renée Bergland teaches American Literature, Research and Writing, and Critical and Cultural Theory, and her courses tend to feature intersectional approaches to gender and race. She is the author of The National Uncanny: Indian Ghosts and American Subjects (UPNE 2000) and Maria Mitchell and the Sexing of Science: An Astronomer Among the American Romantics (Beacon 2008). With Gary Williams, she edited Philosophies of Sex: Critical Essays on Julia Ward Howe’s Hermaphrodite (Ohio 2012). Her essays and reviews have appeared in American Literary History, ESQ, SIGNS, The Nathaniel Hawthorne Review, ISIS, Legacy, and the Journal of American History, among others.

From 2005 to 2015, Bergland held a research appointment in Women, Gender, and Sexuality at Harvard University. At present, she holds a research appointment as Scholar in Residence in Women, Gender, and Sexuality Studies at Dartmouth College.  She has received individual Fellowships from the Fulbright Foundation and the National Endowment for the Humanities, and group fellowships from the Sloan Foundation and the Arts and Humanities Research Council of the United Kingdom.

Bergland is an Emily Dickinson scholar. Recently elected to the board of the Emily Dickinson International Society, she has served as the Book Review Editor for the EDIS Bulletin since 2014.  As Guest Editor, she is coordinating a special issue of Women’s Studies: An Interdisciplinary Journal on Emily Dickinson and Others, scheduled for publication in Fall 2017. In 2009, she was awarded the EDIS Scholar in Amherst Award for archival research on her current book project, Planetary Poetics: Emily Dickinson and Literary Relativity.  Since 2001, Bergland has presented sixteen conference papers on Dickinson and astronomy. On top of her book reviews for the Bulletin, she has published two major essays on Dickinson: “Urania’s Inversion: Emily Dickinson, Herman Melville, and the Strange History of Women Scientists in Nineteenth-Century America,” Signs: Journal of Women in Culture and Society 34:1 (Autumn 2008); and “The Eagle’s Eye: Emily Dickinson’s View of Battle,” in Blackwell’s Companion to Emily Dickinson, Ed. Mary Loeffelholz and Martha Nell Smith (Cambridge: Blackwell Publishers 2008).

Bergland also has an extensive background in Science Studies.  Her biography of the astronomer Maria Mitchell grew out of a lifelong interest in the history of astronomy. As a student at St. John’s College, studying the Great Books, she built a Ptolemaic epicycle machine out of copper tubing and super balls.  In graduate school in English and Comparative Literature at Columbia University, her master’s thesis focused on relativity and modernism.

Finally, Bergland is a feminist theorist with a particular interest in women’s history (literary and otherwise).  This interest is threaded through most of her published works, perhaps most explicitly in her essay collection, Philosophies of Sex (edited with Gary Williams).  Another book in progress, Sexing the Novel: Literary Genius from Hawthorne to Hemingway, will complement her previous book on the sexing of science. In addition to her regular teaching at Simmons, Bergland sometimes steps in to teach feminist theory at MIT (in the Graduate Consortium for Women’s Studies, GCWS) and at Dartmouth College. In Spring 2016, Bergland was a Faculty Fellow at the Gender Research Institute at Dartmouth, participating in a faculty seminar on Gender Matters: Feminist Ecologies and Materialisms.

American Literature, Research and Writing, and Critical and Cultural Theory.

Professor Bergland also teaches in the Honors program and is part of PLAN faculty.

Maria Mitchell and the Sexing of Science: An Astronomer Among the American Romantics (Boston: Beacon Press, 2008).