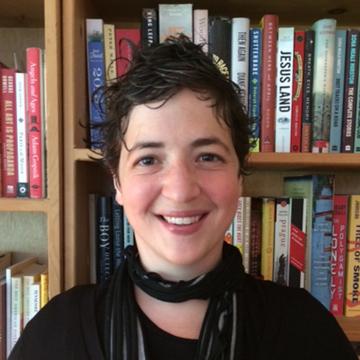 Lena Zuckerwise is a political theorist specializing in the politics of race in the United States, and contemporary democratic theory. Her forthcoming book brings together the unlikely subjects of Black political rebellion on plantations and in contemporary prisons, and Hannah Arendt’s renowned concept of "world." Professor Zuckerwise’s essays on traditions of white supremacy in American politics, and the work of Arendt have been published in the journals, American Political Thought as well as Social Theory and Practice. Her writings on the subjects of post-colonial feminism, the philosopher Martha Nussbaum, and the theory of foundationalism appeared in the Encyclopedia of Political Thought. Other interests include gender and feminist theory, Black feminism, and the political dimensions of art and architecture. Professor Zuckerwise teaches courses in historical political thought; contemporary feminist theory; gender politics; Black political thought; and modern and contemporary theories of justice. Prior to coming to Simmons, Professor Zuckerwise taught at Wellesley College and Mount Holyoke College in the political science and gender studies departments, respectively. She completed her Ph.D. in 2010 at the University of Massachusetts, Amherst, where she was the recipient of the Distinguished Teaching Award. Professor Zuckerwise lives outside of Boston with her partner, two children, and corgi, Olive, who has befriended many of her students. In her spare time, she enjoys hiking and cooking.

The nature of politics (introduction to political theory); theories of justice; Black leaders and leadership; feminism and capitalism; gender and politics; transgender politics and freedom.