Associate Professor and Chair of Political Science and International Relations 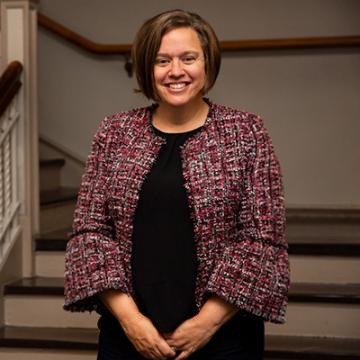 Dr. Leanne Doherty currently serves at the chair of the Department of Political Science and International Relations and is director of the 3+1 Public Policy program. After receiving her BA from Clark University, she completed her PhD at Northeastern University in Political Science with a focus on gender, elections, and American public policy. Her research focuses on the intersection of popular culture and politics, with a book on the role athletic participation can have on candidate success, numerous articles on sports, social media, and activism, as well as articles on political science pedagogy. Her teaching focuses on American politics with courses such as The Politics of American Pop Culture, Intersectionality and Public Policy, and a first year Boston course entitled "One Step Forward, Two Steps Sideways: Female Political Leadership in Boston." During her over twenty year career at Simmons, she has served in numerous positions, including director of the Honors program and Dean of the former College of Arts and Sciences.

Dr. Doherty's love of sports continues outside the classroom, as she is a former college athlete and continues to engage as the coach of her son's 8th grade basketball team. She also practices what she preaches, as serves as an elected official in the town where she lives and serves on multiple boards that promote formal political participation for underrepresented groups. Finally, her students say her social media presence is coming along nicely, so find her on Instagram and Twitter for her thoughts on politics, music, sports, and the occasional picture of what her husband has made her for dinner.