I’m so excited to bond with my fellow Orientation Leaders and meet the incoming class! I’m also excited to get reintroduced to campus after over a year away — I can’t wait to see all the changes to the academic campus.

What's your major, and where are you from?

I’m an economics major with minors in philosophy and public policy. I was born and raised in DC, which I’ve been missing while I live in Brookline for school.

What residence hall did you live in as a first-year?

I chose Simmons for many reasons, most importantly because it was a small school offering a great liberal arts education in the middle of a city, which is what I was looking for. Other factors I considered were that it was financially accessible, and I knew a teacher in high school who was an alum and lauded it highly, which impacted my decision to choose Simmons.

What made you make the move to become an Orientation Leader?

I became an Orientation Leader because it seemed like a great opportunity to meet other people in the Simmons community and practice leadership skills.

What are you most excited about at Orientation?

I’m so excited to bond with my fellow Orientation Leaders and meet the incoming class! I’m also excited to get reintroduced to campus after over a year away — I can’t wait to see all the changes to the academic campus.

My biggest tip would be to go to any event or club meeting that interests you.

What is something you've learned from the last year that you'll take with you?

One thing I’ve learned during the last year that I will take with me is to prioritize time to unplug from electronics (within reason) at some point in the day or week. I certainly got Zoomed out, especially when class assignments and readings were online in addition to classes. Even connecting with friends and family was virtual.

I enjoyed the time I spent volunteering at a local food pantry and relaxing in the park as it was time away from my computer. I’ll definitely prioritize non-screen-related activities in my post-Zoom classes college experience.

Is there anyone at Simmons you've met virtually that you're excited to meet in person?

Of course! When I met some of my fellow Orientation Leaders and Captains for the first in-person time, all I could say was, “Oh my gosh, you have legs! You’re more than just a floating head on a screen!” I know this is very dorky, but it is so cool connecting with people in person after only knowing each other on Zoom.

There are definitely other people in my classes who I got closer with virtually that I’ve never really met in person, and I’m really looking forward to meeting them as well. I’m also excited to meet some professors that I’ve only known virtually, especially those who have really engaging teaching styles in the classroom that were difficult to translate to online lectures.

My biggest tip would be to go to any event or club meeting that interests you. I was a little shy to start attending various clubs and going to events at first because I worried I wouldn’t have anyone to go with and that it would be difficult to make friends. I found that just biting the proverbial bullet and going alone to events served me well. Even if the specific thing I went to wasn’t my cup of tea, at least I had gone and formed an opinion about it instead of wondering.

Furthermore, going to events and club meetings that interest you means that you will inevitably find someone with similar interests as you! I tried a lot of different clubs and events and chose those I found enjoyable. Attending club meetings more than once is also a great way to really know if I liked something or not because sometimes the first meeting is more introduction-focused and might not be as juicy content-wise. Finally, if a club you want doesn’t exist, try forming it!

What's a lesser-known item you recommend first-years bring that they might overlook?

Bring things to do dishes like a dish towel and sponges! In my first year, I lived in the dorms and had a meal plan (like most of you will), and while nothing beats a breakfast of a Common Grounds pistachio muffin or bagel sandwich, I liked to make my own breakfast in my dorm most of the time. This meant I was getting dishes dirty every morning.

While it might not be everyone’s preference to eat some of your own meals in your dorm, doing some dishes will be inevitable: you’ll want to clean a mug you used for tea or wash a bowl you filled with a snack, etc. Dish towels are also great for miscellaneous cleaning tasks you might have around your dorm room. It’s not the most snazzy essential, but I found it handy to have at least a dish towel around.

Tell us one fun fact about yourself.

I’m an identical mirror twin! This basically means that my sister and I are identical in the traditional sense, but she is left-handed while I’m right-handed, which is pretty unusual.

One of my favorite memories is not necessarily specific to one time, but sitting in Common Grounds and chatting with peers and friends between classes was a memorable and great part of my on-campus experience at Simmons.

Congratulations to Joanne Wilson who embodies the spirit of the award with her focus on women- and minority-owned businesses. Wilson is a limited partner in venture funds committed to investing only in women, Black, and Latino founders. 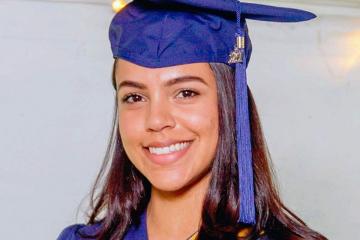