In honor of Founder's Day, undergraduate students are invited to participate in an essay contest. This year, computer science major Pragyee Nepal '21 was selected to present her essay during Simmons' annual celebration. Students were asked to discuss an example of how leaders maintain a sense of belonging and make a difference in their community during times of change. Read her contest-winning essay below!

Change is a huge part of us and it shapes us, yet, we never get used to change. We often deal with changes in our lives and forget about them once they become a habit. But there are some changes that are big enough to impact a whole community or an organization. In those times of change, a community either breaks down completely or it becomes closer than ever to become a family. I have witnessed a change that brought thousands of people together and thousands of leaders together to make a difference.

April 25, 2015 is the date that Nepalese aren’t going to forget for years to come. On this day a 7.8 Richter scale earthquake hit Nepal taking 9,000 lives, injuring 22,000, and destroying the lives of additional thousands of people. Many saw their loved ones die in front of their eyes. Some blamed themselves for the death of their loved one because they were in the same house but one got to live while the other got crushed by the house, the same house they built together, brick by brick. Some regretted not going to the temple with their family and some regretted not picking up their mom’s call because they never knew that would be the last time.

I heard a story of a man who lost 14 members of his family — his daughter was getting married so everyone was gathered in their house, preparing for the big day. When he left the house to buy a bag of milk for a cup of tea, the earthquake hit, and his house collapsed taking everyone in the house. In the blink of an eye, he lost everything — he was now homeless and had no family left. This is only one example, there were thousands of people, each one with their own story of loss and their own pain. My family and I were okay other than the pain we felt from seeing thousands of people hurt. I saw a house roll down a hill and turn into dust while my mom was holding my hand and praying for our safety while we hid under a safe space. Everything was tragic, some houses collapsed while some houses looked like they would collapse if the wind blew strong enough.

In this time of need, leaders stepped in to help those who had no place to stay and had no source of food. Not only that, leaders stepped in to find tents and make space for all the people who were out on the road sleeping because they were too afraid to go inside to sleep since we were getting aftershocks, one after another. It would be unfair to name only one leader. There were leaders in each community and they all played their role very well.

There are many challenges during the time of a natural disaster. First, the natural thing for a human is to save themselves and their family. People would rather not help another person while both are in need, so leaders had to make sure that they built a strong connection between the people in the community. The leader in my community had to ask the owner of the private school, which was located right in front of my house to let the people who just lost their home stay there until the school re-opened. The owner didn’t say yes at first but the leader persuaded him to say yes.

On the other hand, this was also an opportunity to build trust within the community that otherwise wouldn’t have been built. We knew our neighbors and waved each other hello whenever we saw each other, but we never slept under the same tent out in the road. Being an architect and Nepal being an earthquake-prone place, my dad had built a strong house and our neighbors had seen how we built our house. When the earthquake hit, the first night we all slept out on the road. From the second day, my mom and I moved into our car porch but left the gates wide open. The neighbors asked if they could join us since they didn’t trust their own house. My mom and I happily let them stay, we would not have known the level of trust they had on us otherwise. So, we had six families sleeping on our small car porch.

Leaders did more than bring small communities together — they brought the whole country together. Many of our heritage sites and buildings collapsed, and under them, our people. We had firefighters drill through the collapsed houses to bring buried people out but they couldn’t be everywhere. So, many leaders came together to bring the whole country together and helped the firefighters save lives. There was this 6-month-old baby who was buried under a house for 22 hours and the only reason the baby lived was that her mom threw herself over the baby to save her. The smile of that baby after she was taken out of that collapsed house was so precious that it was on the front page of every newspaper.

It is very challenging to bring people together, although thousands of people wanted to help, they didn’t want themselves or their child going into a place where buildings were collapsed when aftershocks weren’t stopping. Parents were afraid to send their child to help because they were afraid of losing their child. Even though leaders couldn’t come to every one of our houses and ask each of our parents to let us go help the people in need, they did motivate us to go help through the news. Many of us might have been called a rebel at that time when we fought our parents to go help, but we became rebels for a good reason. We risked our lives to save the lives of the other.

Although the leaders were not working for money, they did need money to help get food and clothes to those in need. That’s when other leaders stepped up. They started collecting money from all around the world — people from overseas were sending money to help. We saw videos of people performing in the streets in order to raise money for victims of the earthquake. It was heart-warming and it created more respect in our hearts for the people from different parts of the world.

As John Maxwell, an American author said, “The pessimist complains about the wind. The optimist expects it to change. The leader adjusts the sails.” It’s time for all of us to adjust the sail. 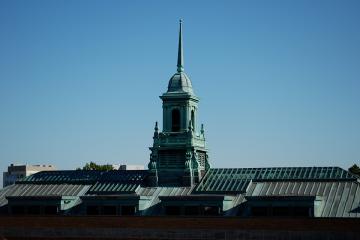 "I write today about the horrific deaths of African Americans at the hands of people who are sworn to protect and serve. George Floyd, Ahmaud Arbery, and Breonna Taylor are but the latest victims of society’s inherent racism." - President Helen Drinan

Reflecting on Women's History: Ashleigh Coren '14MS on her Work at the National Portrait Gallery

Ashleigh Coren '14MS is the Women's History Content and Interpretation Curator at the National Portrait Gallery. We spoke with her about her work and her passion for women's history. 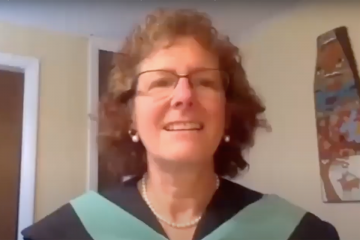 Professor of Practice, Biology, and Director of Exercise Science Randi Lite addresses the undergraduate Class of 2020 during Commencement.