No one gets nominated without the goodwill of their colleagues. In the past, I have nominated people I worked with, and it was a real joy to see them recognized. So it’s special to be on the other side of it.

Michael Rush '01MS, '03MA, Assistant Head of the Manuscript Unit in the Beinecke Rare Book and Manuscript Library at Yale University, was selected as a Fellow of the Society of American Archivists (SAA). Rush is one of three fellows chosen for 2020, the highest honor given by SAA as recognition for outstanding contributions to the archives profession.

“No one gets nominated without the goodwill of their colleagues,” Rush said. “In the past, I have nominated people I worked with, and it was a real joy to see them recognized. So it’s special to be on the other side of it.”

He admires many of those involved in the selection process, making the recognition all the more moving.

Rush is one of three leadership team members in the Beinecke’s Manuscript Unit and is responsible for the team that handles manuscript accessioning. That means working alongside the curatorial staff, making travel arrangements for archives coming from anywhere in the world, recording their acquisition, and overseeing initial description.

He cites the archive of Jerome Zerbe as one of his favorites. Rush described Zerbe as “the first American paparazzi,” who became the staff photographer for the El Morocco nightclub in New York City in the 1930s. Zerbe documented a time and place that was “where Hollywood, New York society and Old World European aristocracy overlapped.” During World War II, Zerbe became the staff photographer for Admiral Nimitz, fleet admiral of the United States Navy and Commander in Chief of the U.S. Pacific Fleet.

Don’t be afraid to accept new challenges that are unfamiliar to you. They may lead to significant contributions.

Besides working with significant collections, Rush enjoys working with new archivists. “I learn so much from working with people who come into the profession and bring their strengths and perspectives. I love seeing other archivists grow into the field.”

He encourages people new to the field to pursue novel ideas. “There are always new things coming along — volunteer to be the person to figure them out,” Rush says.

Early in his nearly-20 year career, Rush took an opportunity to learn more about Encoded Archival Description (EAD) — an XML standard for encoding archival finding aids — in his first job as an archivist at the Massachusetts Historical Society. In 2010, he co-chaired the Technical Subcommittee for Encoded Archival Description and collaborated with colleagues from all over the world to revise the standard. In 2015, the Society of American Archivists published EAD3.

“The EAD revision was a career-defining moment for me and a great honor to be the person trusted to take that on,” says Rush. “Don’t be afraid to accept new challenges that are unfamiliar to you. They may lead to significant contributions.”

His role in the EAD revision set Rush apart and propelled him forward into this SAA fellowship, but he’s eager to recognize the accomplishments of his peers. “I hope that I get the opportunity to serve on the fellowship committee. I look forward to saying nice things about newly inducted fellows while they have to stand there and take it!”

Tiffany Hogan '03MBA was recently featured in Comparably's list of the top 49 Inspiring Employer Brand Leaders in the Northeast. Hogan also shares her advice to current students on the importance of building relationships throughout your career. 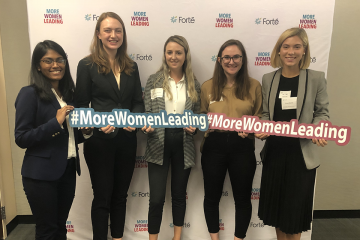 Last fall, Maegan Bernier ’20 and Shelby Young ’21 were selected to attend Forté Conferences for Undergraduate Women. We caught up with Bernier and Young about the valuable lessons they learned from these experiences.

President/CEO of the Nantucket Island Chamber of Commerce, Kristie Ferrantella '12, tells us how the Chamber helped local businesses before and during the pandemic.