We're hoping to make progress in an area that has challenged speech scientists for decades: what is the mapping between prosody and meaning. This research enabled me to learn about a field that has always fascinated me.

“Nanette's amazing,” says Rasmussen, “She definitely influenced my decision to come to Simmons.” The computer science student is now working on computational linguistics research with Veilleux and several other students.

Professor Veilleux further defines prosody as "the aspect of speech encoded in pitch, volume, and duration."

"We're hoping to make progress in an area that has challenged speech scientists for decades: what is the mapping between prosody and meaning," says Rasmussen. "This research enabled me to learn about a field that has always fascinated me.”

With interests in both STEM and humanities, Simmons seemed the perfect fit. “At Simmons, I’m able to both hone my programming skills and pursue other interests, such as film studies,” she says.

Rasmussen has also explored work in the field through an internship at MITRE, a not-for-profit company that operates multiple federally funded research and development centers.

“I had the pleasure of working on a project for Connie Lewis, a Simmons alumna herself,” says Rasmussen. “I also worked on another project over the summer and did so well that I was retained as a part-time on-call staff member for the year.” Rasmussen was able to take a full course load during Fall 2019 while also retaining her internship.

This semester has brought her farther afield: studying abroad at the University College Dublin (UCD) in Belfield, an enclave of Dublin, Ireland.

“I'm taking a variety of humanities and computer science courses," explains Rasmussen. "Because of the research project, I'm taking a Linguistics course, 'The Use of Language and Communication.'”

Dublin, she reports, is small and perfect for exploring, and the university hosts day trips and events for study abroad students. She’s also studying "Human Computer Interaction (HCI)," an interdisciplinary course that looks at theoretical concepts in HCI as well as design thinking principles, and a course on Dublin's museums and culture. “Most of the museums in Dublin are free. This course made me aware of all they have to offer and is also teaching me about Irish history through architecture and archaeological finds.”

In addition to the International Student Society, Film Society, and Harry Potter society, Rasmussen has joined the UCD Equestrian club and Fencing team.

Her return to the Boston campus in the fall will not be without excitement. “This will be my second time organizing SharkHack, Simmons's annual hackathon.” Last year, Rasmussen coordinated outreach to universities and helped contact sponsors. The 6th Annual SharkHack will be held Friday, October 16, 2020, to Saturday, October 17, 2020, and Rasmussen is SharkHack's lead organizer.

“As a student-run event, building relationships with sponsors is extremely fulfilling," she says. "I love when companies are passionate about helping students succeed. Last year, several sponsors conducted on-site interviews for internships. Past attendees have made lasting professional connections through SharkHack.” 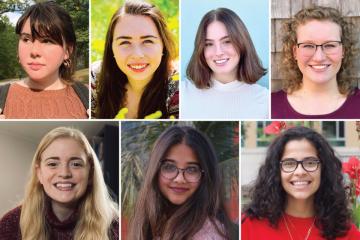 The Passionate Leaders Project supports undergraduate students seeking to enrich their academic and professional interests by funding learning opportunities beyond the boundaries of the traditional classroom. Learn what the Spring 2021 cohort is up to!