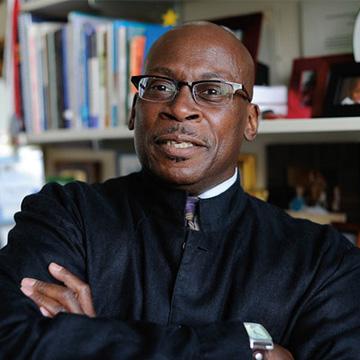 In 2010 Professor Bailey was elected President of the International Federation of Social Workers. He is the first person of color to hold this post and only the third person from the United States to do so. IFSW is a federation representing over 90 countries and 746,000 social workers globally. He is a past president of the North American region of the International Federation of Social Workers (IFSW) located in Berne, Switzerland having served in that role from 2003 until 2006.He was appointed as the inaugural Chair of the Policy, Advocacy and Representation Commission (the PARC) in August 2006 where his responsibilities included the review of existing and the development of new policies; and he oversaw  the IFSW representatives at the United Nations in Nairobi, Geneva, and New York City and Vienna.

In 2010 he was appointed to the Council of Social Work Education (CSWE) Global Commission. He previously served on the board of the North American and Caribbean Association of Schools of Social Work representing CSWE

He is a member of the board of the Fenway High School in Boston where he serves on the Governance and Facilities committees. In 2009 he was appointed by the Honorable Deval Patrick, Governor of Massachusetts, to serve on the Board of Directors of the Massachusetts Educational Financing Authority (MEFA). MEFA, created 30 years ago, is a self-financing state authority, not reliant on state or federal appropriation which sells bonds to help undergraduate and graduate students fund higher education. To date, MEFA has issued approximately $4.2 billion and bonds and have assisted hundreds of thousands of families in financing a college education. At MEFA he chairs the Nominating Committee, and is a member of the Audit Committee. He was reappointed by Governor Patrick to a term ending in 2019.

He is a member of the Gay and Lesbian Advocates and Defenders (GLAD) Board of Ambassadors and the AIDS Action Advisory Council. He is a Trustee of the Union United Methodist Church (UUMC) in Boston.

Professor Bailey was the Chairperson of the National Social Work Public Education Campaign. He is a former member of the NASW Foundation Board of Directors. He was a member of the board of the NASW Insurance Trust (now Assurance Services, Inc.), a public company which is the largest provider of insurance services for professional social workers.

Professor Bailey is the recipient of numerous awards and honors. He was named Social Worker of the Year by both the National and Massachusetts NASW in 1998. He was made a Social Work Pioneer by NASW in 2005, making him the youngest individual to receive this honor and joining individuals such as Jane Addams and Whitney M. Young.

In May 2013 Professor Bailey received the degree Doctor of Humane letters , honoris causa, from the University of Connecticut.