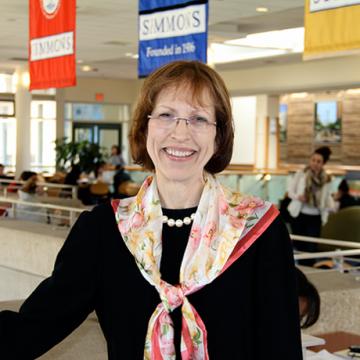 Donna Beers is Professor of Mathematics at Simmons University where she has taught since 1986. At Simmons she has served as chair of the Mathematics Department as well as director of the Honors program. She has served on numerous college committees, including the Promotion and Tenure Committee, Faculty Council, the Curriculum Committee, and the Fiscal and Budgetary Affairs Committee.

An algebraist, her research publications are in the areas of group theory and group algebras of infinite abelian groups. She shares the constructivist philosophy of education and believes that students learn mathematical ideas and ways of thinking through problem-solving and reflecting on those experiences. Her scholarly interests include inquiry into student learning to strengthen teaching. A particular teaching niche for her is teacher preparation; of special note, she collaborated in developing a learning community for pre-service elementary school teachers.

Her teaching spans a wide range of students, from first-year pre-medical students in calculus, to sophomores in discrete mathematics, to juniors who are elementary school teacher candidates, to seniors majoring in mathematics. Promoting undergraduate research is a vital extension of her teaching. Recent topics pursued by her students include: elliptic curve cryptography, solving Rubik’s Cube with group theory, the population dynamics of Atlantic salmon, and the correlation between patient religiosity and health care utilization. Desiring to recognize the accomplishments of Simmons students in mathematics, she initiated and serves as adviser to the Massachusetts Theta Chapter of the national mathematics honor society, Pi Mu Epsilon. In October, 2012, she was honored at Simmons University as the first recipient of the Toby Sloane Award for Student-Centeredness in Teaching.

Since graduate school, she has been an active member of the Mathematical Association of America (MAA), the largest professional society to focus on undergraduate mathematics education. She has served as chair and governor of the Northeastern Section of the MAA, and also served on the editorial boards of MAA journals, including The American Mathematical Monthly and Mathematics Magazine. She launched the Simmons University Student Chapter of the MAA; her advisees regularly present their research at Chapter meetings. In fall, 2006, she spent a sabbatical leave as Visiting Mathematician at the MAA headquarters in Washington, D.C. She received the Certificate for Meritorious Service in 2007 for her contributions to the MAA and her commitment to the advancement of mathematics. Her professional service includes extensive service as outside consultant for departmental program reviews in the mathematical sciences. She is co-author of the MAA Guidelines for Undertaking a Self-Study.

Integrating my teaching and scholarship is very important to me. I continually work to understand and apply best practices for teaching mathematics, and I use my classroom as the seedbed for scholarly projects. At present I am investigating the problem of student gaps and misconceptions regarding the mathematical concept of function, the one-to-one and onto function properties, and equivalence relations. Functions and equivalence relations are foundational concepts for all of mathematics. Strengthening student understanding of these concepts enhances their success in higher mathematics and science courses.

One of the liveliest, current areas of mathematics research and application is graph theory. Its ideas and techniques are being used for competitive advantage by companies such as Google, Facebook, and E-Bay in order to store and mine vast sets of interconnected data. Graph theory is also being used in medical research to model complex brain networks, analyze neurological disorders, and solve problems in genomics. Analyzing social networks is an important area of research in graph theory. Power and centrality are essential and related properties of social networks. They are among the summary statistics and performance metrics used to describe and compare networks. I am working with advisees in independent studies and in the Summer Undergraduate Research Program at Simmons (SURPASs) to apply social network analysis to areas that include marketing and intelligence.