Simmons helped me figure out how I could use my voice and my presence for change.

How did Simmons prepare you for your career?

Simmons helped me figure out how I could use my voice and my presence for change. I didn't realize it at the time, but this notion of finding my voice at Simmons — in written communication, and at orientation and other major events — settled into me. It has shaped who I am right now as an educator.

As an undergraduate, I majored in African American Studies and Sociology, with a concentration in social policy. While at Simmons, I did a semester-long domestic exchange program in Atlanta, Georgia called Women, Leadership, and Social Change. A lot of the work I did in that program was tied to the Black community and with marginalized individuals in Atlanta. Georgia is vastly different from Massachusetts, but my studies gave me context and language to draw from as a student, and deepened my understanding of what it meant to be Black in America. This also helped me realize that I wanted to support communities, particularly communities of color and with immigrant populations like the one I grew up in, in Cambridge. I wanted those communities to be successful, and my way of contributing to change, after graduation, was by way of education.

I now have a master's degree in student affairs administration, which makes sense because I was so involved as an undergraduate student, particularly with the Black Student Organization and the Caribbean Student Association. I also have a Ph.D. in higher, adult, and lifelong education. As a scholar, I am interested in the role of higher education systems and institutions in partnering with their local communities to develop interventions that address local challenges.  As an educator, I’m really interested in working with the students in my program to realize who they can be as practitioners in their professional places of practice and how they could create or foster a sense of belonging for their future students and colleagues. I work in a globally focused education program, so I engage my students to think about the impact they will have on people and places beyond the U.S., and how they can use their own voices to create more equitable and culturally responsive experiences for those they encounter.

What led you to your double major?

I was interested in human services and psychology, but when I took my first Sociology class, I never turned back. By chance, the electives I took overlapped with African American Studies. Eventually, a faculty member asked if I was planning to double major. I had no idea that was a possibility!

African American studies was a great complement to my Sociology degree. I knew that I wanted to work in academic settings, but outside of the classroom. The sociology degree helped me to understand how culture influences people's lives. African American studies helped me to really hone in on race and ethnicity within a U.S. context. I'm a first generation American, my family is from Haiti. My initial understanding of what it meant to be African-American came from what I was watching on TV. My first African American studies class was taught by the first Black teacher I ever had in my life. That was my sophomore year in college. That was significant for me just to realize: I was born and raised in Massachusetts and never had a black teacher. So being in that major had multiple implications for me.

My studies at Simmons taught me the history of Black Americans in this country and it helped me to understand the connection between the Caribbean and the United States. I learned about the legacies of the Civil Rights Movement and other movements for social justice, including  how student activism at Simmons in 1969 was shaping my experience as a Black student at Simmons over 25 years later. The major also helped me to understand the communities I wanted to serve. It helped me to put those communities in a particular political, social, and historical context and gave me a language to draw from. It gave me a critical perspective that is embedded in the work that I do today. 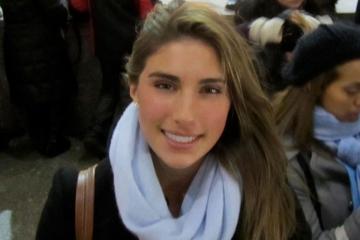