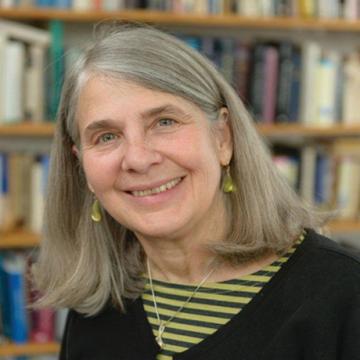 Pam Bromberg began her academic career as a Blake scholar and has migrated over the years to teaching and scholarly work on a broad variety of writers, including contemporary women and post-colonial novelists. Recent publications include essays on Blake's visual art, but also on the work of Margaret Drabble, Margaret Atwood, Lillian Hellman, and Buchi Emecheta. She has also contributed essays on teaching Austen's Pride and Prejudice and Emma to the MLA's Approaches to Teaching volumes; a new essay on “Mansfield Park:s Austen’s Most Teachable Novel” has just been published in the series. She has recently presented work on Margaret Atwood at international conferences, leading to the publication of an essay in Margaret Atwood: The Open Eye.

Her interest in Austen has inspired a seminar on Jane Austen and Virginia Woolf, a course that provides in depth study of the development of two of England's greatest novelists. In recent years she has been teaching exciting new seminars on the Postcolonial Novel and The Colonial Legacy in Africa: History and Literature. In both of those courses students have the opportunity to work on novels of their choosing for final projects.

In recent years I have been working at the intersection of pedagogy and scholarship. I have contributed essays on teaching the novels of Jane Austen to a series published by the Modern Language Association entitled Approaches to Teaching World Literature. My essay on “Mansfield Park: Austen’s Most Teachable Novel” was just published.

I have also completed an essay for the forthcoming volume on Approaches to Teaching the Novels of Henry Fielding on “Tom Jones as the Cornerstone in 'The English Novel through Austen.'” This essay places the teaching of Fielding’s monumental work within the context of a course that combines formalist focus on the novel as a genre with attention to historical constructions of authorship, gender, class, and the family.