Assistant Professor of Practice and Faculty Director of Student-Driven Media 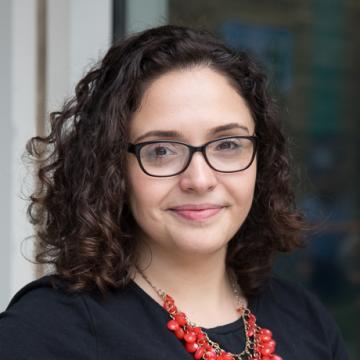 Erica Moura is an award-winning and Emmy nominated journalist and multimedia storyteller.

She began freelancing as a crime reporter for the Somerville Journal, wrote for the Dover-Sherborn Press, and eventually made her way to the Boston Herald as a multimedia reporter. During her tenure at the Herald, she wrote articles, produced videos, and helped launch Herald Radio.

Erica was part of a team of reporters sent to cover the tragedy at Sandy Hook Elementary School, her first national story. Just a few months later, she was at the finish line of the Boston Marathon when the bombs went off, and told the stories of survivors the following year.

She's also covered the 2013 World Series, the 2016 election, and lots of stories in between.

Her national awards include three Telly's for her coverage of LGBTQ+ youth in the foster care system and veterans returning home and coping with war. Her regional Emmy nomination was for her mini-documentary, Robots in the Operating Room. (Fun fact: she faints at the sight of blood, but somehow stood in the operating room for 6 hours).

Erica Moura is a proud graduate of Simmons University (B.A.) and Emerson College (M.A.). During her undergraduate career, Erica was part of the team that launched Simmons Radio.