These photograph collections present insight into the lives of people and communities who, without the thorough documentation of the photographer and the conservation efforts of archivists, could easily have been erased over the years due to cultural and religious dominance.

School of Library and Information Science student Carolina Quiroa ’21MS is the recipient of the 2019 Elmar W. Seibel Scholarship from the Art Libraries Society of North America New England Chapter. In her award application, she shared her experience as an intern at the Centro de Investigaciones Regionales de Mesoamérica (CIRMA) in Antigua, Guatemala, during the summer of 2017.

Founded in 1978, CIRMA serves as a library, general archive, and photograph archive, and holds collections related to the history of Central America. Its fototeca, or photograph library, is a prominent repository dedicated to preserving the visual history of Guatemala.

“I studied Latin American history in several of my undergraduate courses as I pursued a major in art history,” says Quiroa, citing this study as the basis for her interest in CIRMA. “I learned the importance of preserving the cultural information and experiences of oppressed people during this internship. This experience granted me first-hand insight into the need for preserving historical documents for future generations.”

Quiroa worked on two projects in the photograph library — the first involved gelatin silver and collodion plates dating back to the late 19th and early 20th centuries. This collection contains the work of Juan José de Jesús Yas, or J.J. Yas, who immigrated to Guatemala from Japan. His photographs consisted of a variety of portraits and architectural structures around the city of Antigua, Guatemala, and underwent complex processing before completion.

“As I helped to organize and construct permanent, protective housing for these photographs, I learned that certain slides are extremely fragile and sensitive to changes in temperature and must be handled with care,” says Quiroa. “The collection also offered a glimpse into the long history of cultural exchange and artistic adaptation among a variety of people groups.”

The second assignment involved working with photographs by Jonathan Moller, some of which are featured in his book Our Culture is Our Resistance: Repression, Refuge, and Healing in Guatemala (powerHouse Books, 2004). Moller worked in the Guatemalan highlands in the 1990s and early 2000s to document indigenous communities’ lives during the country’s civil war, when the Guatemalan government committed massacres against impoverished Mayan communities.

“Many of the photographs I worked with documented the exposure of clandestine mass graves and featured people who lost family members in the genocide,” says Quiroa. “There are many individuals in positions of authority, including academia, who deny the history of genocide in this country, despite events like the recent 2018 discovery of a mass grave just 11 miles away from CIRMA. This collection details the survival of an oppressed people group, and is important evidence toward recognizing the injustice of the past.”

The experience taught her the value of preservation work. “These photograph collections present insight into the lives of people and communities who, without the thorough documentation of the photographer and the conservation efforts of archivists, could easily have been erased over the years due to cultural and religious dominance. By working for CIRMA, I realized that I would like to pursue a vocation that preserves historical and cultural artifacts of marginalized people groups, particularly in Latin America and Guatemala.”

Quiroa also witnessed how a natural disaster can affect conservation efforts. During her time at the Center, the Volcan de Fuego erupted and caused mass destruction in the surrounding villages. Antigua was safely located 18 miles away from this active volcano and remained relatively unscathed, but the city was covered in a layer of volcanic ash.

“The next day, I reported to my internship to find all of the archivists and librarians atop the Center’s roof sweeping up the sandy dust,” she says. “After strapping on a blue mask, I joined the efforts to fill dozens of large bags with the ash, to protect the roof’s structural integrity. The librarians were as enthusiastic about clearing the roof as they were when working with rare manuscripts and photographs at their desks, and I admired their adaptability.”

Quiroa’s advice for current or prospective students: “Embrace your curiosity, especially when you are unsure of your career/life direction. Don’t let fear or indecision stop you from trying new things. Discovering what you enjoy — sometimes by figuring out areas that are not a good fit — may guide you toward exciting new possibilities and experiences.” 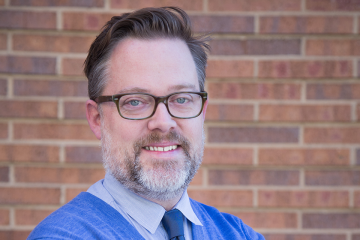