Self-Education with the Anti-Oppression LibGuide

This guide is for students to have something to point to, to show examples — this is a microaggression, this is inappropriate. If you really don’t know how it’s racist,
then check out this guide.

Education on issues of racism and oppression is vital. But if not already well-versed in these topics, how do you know where to start?

To that end, Research & Instruction Librarian Stacy Collins ’16MS, ’16MA created the Anti-Oppression LibGuide to educate and support the Simmons community and beyond. A libguide, she explains, is “a learning tool that enables self-education, a pathfinder to resources, education, support. In the case of the Anti-Oppression guide, it’s a big giant pile of Google searches to get people started.”

The initial inspiration for the libguide came to Collins after graduating from the School of Library and Information Science. As a student, she became “obsessed” with libguides and had the opportunity to learn more as an interim reference librarian at Simmons. In 2015, community gatherings were taking place on campuses across the country to address racial inequities. Collins attended a forum at Simmons in response to the student’s Ten Demands to hear more from the student perspective.

“I heard students talk about experiencing trauma, with no ability to express it,” she recalls. “When you share an experience, you don’t want to be asked ‘how is that racist?’ Or hear someone excuse their comment, saying, ‘that’s not a microaggression, it’s a compliment.’ It all felt familiar to me as a Black student and librarian.”

It occurred to her that many people were not adept at identifying racism, which presented a problem.

“This guide could include so many interconnecting facets of oppression,” Collins adds. “Diversity and inclusion are great, but even when we are at our nicest, these issues exist systemically.”

Ideally, the guide can allow people to do their own research into the issue. “The most vulnerable folks shouldn’t carry the extra obligation to educate people or convince them to care about their struggle,” she says. “This guide is for students to have something to point to, to show examples — this is a microaggression, this is inappropriate. If you really don’t know how it’s racist, then check out this guide.”

Since its launch in 2016, the guide has a following outside of academia, even becoming a discussion point on Twitter. “I received my first round of reuse notifications as the guide was shared on listservs and social media, leading up to the 2016 election,” Collins recalls. “It shows that the community was sharing the libguide, borrowing the content, and changing it to suit their needs. That was very cool. It felt important.”

The most vulnerable folks shouldn’t carry the extra obligation to educate people or convince them to care about their struggle.

Librarians, of course, were the earliest adopters. According to Collins, librarians were eager to use it around the 2016 election due to their concern for struggling students and wanted to lend their support during this uncertain time. Since then, Collins has seen the libguide often cited in books and articles and among resource lists online.

That said, Collins is concerned about keeping the resource fresh: “Keeping it updated is a huge task. Plus, it breaks every rule of user experience. So much important content falls below the digital fold. And there are so many links! But the point is that these links are where to find these conversations, and they are all nuanced and complex.”

Still, she has hopes for what the guide could become. “I would like resources that pull apart this idea that everyone learning about racism is learning about it from the same place. I want to offer resources to Black folks, non-Black folks of color, and Native folks who all have different backgrounds and lived experiences of racism, and provide intercommunity conversations around colorism between communities of color. Also, resources for people with no idea what racism is — you can be racist without realizing it.”

We caught up with data science and analytics major, Ismah Ahmed '22, about her COVID-19 project and online learning during a pandemic. 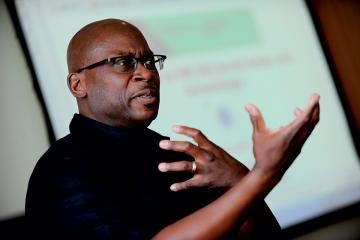 In honor of Martin Luther King Jr. Day, Assistant Dean Gary Bailey reflects on the first days of 2021 as the US continues to struggle with intersecting pandemics of COVID-19 and racial inequity.

Congratulations to Carolina Quiroa ’21MS, recipient of the 2019 Elmar W. Seibel Scholarship. In her award application, Quiroa shared her experience preserving the visual history of Guatemala.