What I love about historical fiction is the opportunity to mingle what is known with what is not known. The gaps in Frieda’s history are an invitation to the writer.

After a 30-year career as a social worker and therapist, Ellen Prentiss Campbell ’82MSW (known in her professional career as Ellen C. Pskowski) uses her knowledge of the human psyche to create fictional characters.

“This novel is a way for me to braid together my therapist self with my writing self,” says Campbell of her most recent book, Frieda’s Song (Apprentice House, 2021), about the life and career of psychiatrist Frieda Fromm Reichmann. Dr. Fromm Reichmann fled Hitler's Germany in 1935, then lived and practiced for the rest of her life at the Chestnut Lodge Sanatorium in Rockville, Maryland — not far from where Campbell, herself, did the same.

“Frieda had tremendous faith in the potential for individuals to heal,” says Campbell. “I lived so close to the Lodge that on the day it mysteriously burned to the ground [in 2009], I awoke to the smell of smoke.”

Having long been intrigued by old homes, this proximity to Chestnut Lodge — where Frieda had died in 1957 — planted the seed for the novel. Campbell was fascinated, not only by the historical figure of Frieda but by imagining what may have happened when the Lodge burned down.

“I saw that the cottage was Frieda, herself,” says Campbell. “She designed it, and it shows her resilience, her willingness to put down roots here.” At the time, real estate covenants barred Jews and non-citizens from homeownership.

“What I love about historical fiction is the opportunity to mingle what is known with what is not known. The gaps in Frieda’s history are an invitation to the writer.” In both Frieda’s Song and her first novel, The Bowl with Gold Seams (Apprentice House, 2016), Campbell focused on mid-20th century history, particularly the World War II era. She researched her subjects extensively but chose not to interview people who knew Frieda in life — particularly Frieda’s former patients.

This novel is a way for me to braid together my therapist self with my writing self.

While acknowledging the missed opportunities these potential interviews represent, such direct accounts may have derailed her own vision. “It would have inhibited my sense of freedom,” she says. “I was able to inhabit the characters in a way that is true to my understanding and connection with Frieda. When I’m writing fiction, I’m listening to the character’s voice almost the way I listened to a client’s voice.”

Frieda’s papers have since been transferred to the Library of Congress and remain under seal until later this year. “That might have been a treasure for me,” she reflects, “but on the other hand, not having them provided a different opportunity.” The Peerless Rockville Historic Society has designated Frieda’s cottage as a historical building. “That is rare for a woman’s residence,” says Campbell. “It’s a great validation of her life as a scientist and refugee. I’m hugely grateful.”

Campbell's first encounter with Frieda happened while studying at Simmons when she read her book, Principles of Intensive Psychotherapy. “Her voice comes through in that book,” she recalls, having read the book numerous times throughout her career. “That voice and those principles were helpful to me as a clinician and informed my respect and fascination with her as a writer.”

She uses the relationship she had with Frieda’s work to inform the fictional character in the novel, a social worker living in Frieda’s former cottage, who finds guidance in Frieda’s writing. “I think the novel is an homage not just to Frieda, but to the power of passing on wisdom through mentorship.”

Her own experience with strong mentors was pivotal for her social work career. “My field supervisors were wonderful mentors to me. I benefited from the opportunity to work deeply and slowly with clients and to learn to listen acutely.”

Her first position after graduating from Simmons was at Mass General Hospital. “It was a very new and revolutionary adult home care program. The designer of the program was there, and I learned so much from her about the process of understanding the patient’s needs.”

Campbell later spent more than 30 years at the Jewish Social Service Agency in Rockville, moving from intake clinician to clinical supervisor and psychotherapist. “I have been fortunate to find supportive colleagues and mentors in social work, and now in my writing career. That relationship of mentee to mentor is something that was very important for me.” 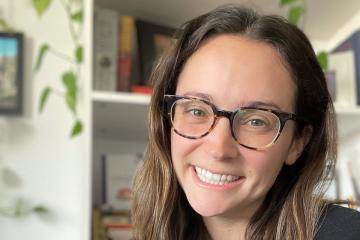