From the Navy to Nutrition: Sonju Bucci '24MS Returns to her First Passion

I was commissioned on June 30, 2008, on top of the USS Arizona. It was a proud moment because of the historical significance of being on the sunken ship. I felt like I couldn’t let these sailors down — they are the real heroes.

Tell us about your decision to join the Navy. 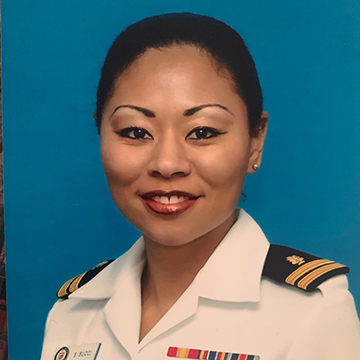 It was a fluke — I was a civilian for Navy medicine. I ran the Deployment Health Clinic at Kaneohe Marine Corps Base Hawaii. I had an epiphany one morning and said, “I can do this same job in the Navy.” That day I called out of work and contacted a recruiter. Thank goodness I called — I didn’t know that medical accepts officers later in life. The process was quick but not easy. I was shocked that I was accepted and commissioned as a Lieutenant (junior grade) or O2.

I was commissioned on June 30, 2008, on top of the USS Arizona. It was a proud moment because of the historical significance of being on the sunken ship. I felt like I couldn’t let these sailors down — they are the real heroes.

Tell us about your career in the Navy.

I did the opposite of what most service members do — I started my Navy career late. I went to college and was very against going into the military. I got my BA, then MPA, and Healthcare Admin degrees. I got married, had kids, and waited several more years.

Then I was commissioned in Hawaii.

I transferred to Yokosuka, Japan, where I was given leadership roles as Department Head of Healthcare Business. This was from October 2008 through October 2011, meaning my kids and I survived the Fukushima Meltdown and the radiation leaks. This was the first time that I was impacted by a “shut down.” It prepared me well for the COVID-19 pandemic. I was cool as a cucumber and enjoyed staying in the house because the meltdown was the first time I was involved in a “world-ending” event.

I then transferred to Navy Recruiting Command, New England, where I was Department Head and responsible for running officer medical programs until 2014. We put doctors, nurses, dentists, and healthcare administrators in the Navy. 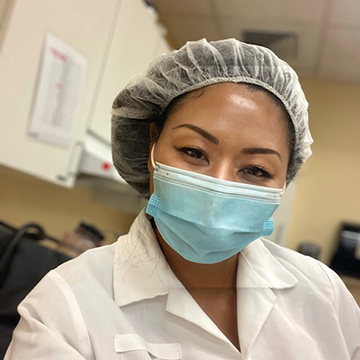 In January 2015, I was transferred to Navy Branch Health Clinic Portsmouth, NH (Kittery, ME). I was second in charge of this clinic.

Tell us why you decided to pursue a master of science in nutrition?

This is my second master’s, and sometimes I wonder what I got myself into.

Nutrition has always been on my mind. Initially, I was getting my master’s in nutrition but won a fellowship to get the MPA. No one turns down a fellowship, so I accepted it. But nutrition is my first love, and I just could not let it go. So, here I am 20 something years later.

...nutrition is my first love, and I just could not let it go. So, here I am 20 something years later.

What's your favorite part of the nutrition program?

I love learning about nutrition — there is so much to learn. There are always new research topics, emerging career fields within nutrition, and different ways to specialize in nutrition. I’m coming in at the right time!

What does Veterans Day mean to you?

It is a special day. I like to honor those who paid the ultimate sacrifice and those who have gone before me. We live in the greatest nation in the world. I’m glad I made the decision to commission in the Navy. It is one of my proudest moments.

Have you been able to translate lessons from the military into your academics? 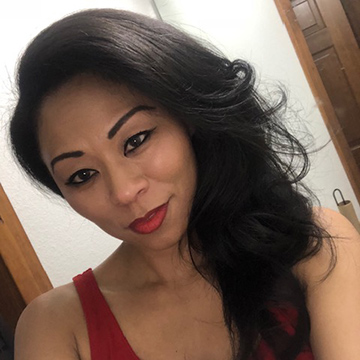 Yes, I learned to take responsibility for my actions and how to communicate. Naval Officers are taught to have conversations, especially difficult ones. This trait means that I need to advocate for myself. If I see something wrong, I speak up. If I need to help someone else, I volunteer. If I need to provide kind words to brighten someone else’s day, then I do it. We are a community and are here to support one another. I hold myself accountable. I just tell myself that I am getting better as a student every day.

A Family Nurse Practitioner (FNP) student in the Simmons’ RN - FNP Program, Hannah Careway '23MS shares what inspires and sustains her in training for her first Boston Marathon. 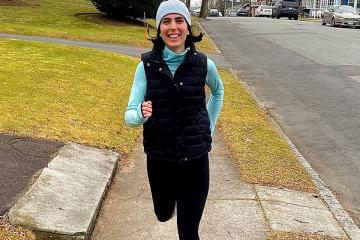 Tell us about your position in the Department of Critical Care at Boston Children's Hospital. I am a Research Assistant in the Priebe Lab. Our focus is on the development of new antimicrobials and vaccines to combat and prevent bacterial... The following is a conversation between Devashish Tiwari, Assistant Professor in the Department of Physical Therapy at Simmons University, and Taylor Eubanks, graduate student in the Gender and Cultural Studies program. Professor Tiwari discusses his current research on pediatric dizziness...