A behavior analyst figures out why a specific behavior happens in a specific environment. If you understand the tenets of behavior analysis, you can assess why the behavior is happening — for pets and humans, the same principles apply.

“Dogs are under a lot of pressure to be members of the family,” says Terri Bright ’08MS, ’13PhD. “What used to be a creature who lived outside and warned of intruders now lives in your home and has five Halloween costumes, playdates, daycare, and dog walkers. But they are animals, and people often forget that.”

This is the crux of many aggression issues Bright sees in dogs she treats as Director of Behavior Services at the Massachusetts Society for the Prevention of Cruelty to Animals - Angell Animal Medical Center (MSPCA Angell).

“Dogs can only behave like dogs,” says Bright. “If there is something they are afraid of, they experiment with barking at it to make it go away. If that works, the dog has learned a behavior which, if reinforced, will increase.”

Before coming to Simmons, Bright had a private practice as a dog trainer, going to homes and teaching dogs and owners through positive reinforcement. While agility training her bull terriers, she realized she wanted to learn more about animal behavior. When she spoke to Michael Cameron, then-Director of Behavior Analysis at Simmons, he accepted her into the master’s program on the spot.

“I knew nothing about applied behavior analysis,” she says. “Everyone else in the program worked with humans except for me, but my professors assured me that the science absolutely applies to animals. They taught me how it applied across organisms everywhere.”

...my professors assured me that the science absolutely applies to animals. They taught me how it applied across organisms everywhere.

Once finished with the master’s degree, Bright embarked on the behavior analysis doctoral program the following semester. “All the professors at Simmons were so welcoming and interested in my profession, and interested in making the bridges from animals to people. It has been amazing.”

During her time at Simmons, Bright volunteered at the MSPCA in Jamaica Plain, offering basic training to shelter dogs and teaching obedience classes. “After five months, I was hired as Training Coordinator,” says Bright. “After I defended [my dissertation], I was given a clinical practice and founded the MSPCA-Angell Behavior Department.” The department has three locations and offers seventy classes a week across Boston, Waltham, and Methuen.

“I see 400 private behavior cases a year,” she says. “All of that from winding up in a program I didn’t know anything about — thanks to the support of my professors.” She continues to work with Professor Russell Maguire and Associate Professor and Director of the Doctoral Program for Behavior Analysis Ronald Allen, who most recently inspired her to launch The Journal of Applied Behavior Analysis in Animal Training (JABAAT), an open-access journal currently accepting submissions.

“A behavior analyst figures out why a specific behavior happens in a specific environment,” she says. “If you understand the tenets of behavior analysis, you can assess why the behavior is happening — for pets and humans, the same principles apply. For me, good leadership is the use of behavioral skills to help my employees do their jobs.”

As for the animals she sees in her office, she encourages dog owners to consult professionals. “I wish I were an elephant trainer because if you had an elephant, you would come right to me for advice,” explains Bright. “Instead, people get advice about dogs from the internet, their brother, or dog trainers who don’t know what they’re talking about. They either don’t change the behavior, or they make it worse.”

The process can take a long time, but if we can help them, then we have changed the life of that family and that dog.

Bright will first assess the pet’s ability to learn — if they cannot learn because of underlying fear and anxiety, she works with veterinarians to implement the necessary medication. “We have to teach them to have a different response when they see a dog they would typically bark at.”

Most recently, Bright has trained Ribbon, an American Bully (Amstaff/bulldog cross) who exhibited aggression toward children after she adopted her. “I’ve taught Ribbon to ignore those children and to look at me instead, and she will get a ton of treats when we pass by. With enough training and exposure, she can learn that good things happen if she doesn’t growl at children.”

Similarly, her clients need to take time and have patience with their dogs for new behaviors to take hold. “The process can take a long time, but if we can help them, then we have changed the life of that family and that dog.”

Simmons Taught Hannah Sieber '14 to Speak Up, Now She Teaches Students to be Confident

Software engineer, Hannah Sieber '14, followed her passion for teaching and launched TriTutoring LLC in May 2020. In addition to tutoring, Sieber helps students be their best selves and gain confidence. 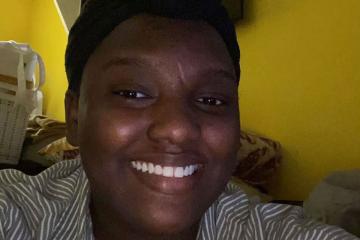