I wanted more people to talk about the unfair ways that biracial people are treated, but I wanted to raise my concerns in a nuanced way that would be accessible to a wide audience. I channeled those thoughts into dark fantasy, since that’s the kind of book that I personally enjoy.

Kylie Lee Baker '22MS grew up in Boston and has since lived in Atlanta, Salamanca, and Seoul. Her work is informed by her heritage (Japanese, Chinese, & Irish) as well as her experiences living abroad as both a student and teacher. She has a BA in creative writing and Spanish from Emory University and is pursuing a master of library and information science degree at Simmons University. In her free time, she plays the cello, watches horror movies, and bakes too many cookies.

Learn more about her debut novel, The Keeper of Night.

What made you choose to pursue a master of library and information science (MS) at Simmons?

I was teaching English in Korea when one of my coworkers mentioned how she wished she’d studied to become a librarian. I started looking into working in libraries and realized it would be a way to involve books and reading in my life and would help people beyond my goals as a writer.

I grew up in greater Boston and wanted to come home after living in Korea for a few years, so Simmons was the best place to go. There are so many libraries, universities, and museums around here, so it’s a good place to start a career in library and information science.

What inspired you to write The Keeper of Night?

I wanted more people to talk about the unfair ways that biracial people are treated, but I wanted to raise my concerns in a nuanced way that would be accessible to a wide audience. I channeled those thoughts into dark fantasy, since that’s the kind of book that I personally enjoy.

I wanted people to organically understand, through a fun adventure story, some of the challenges that biracial people face. I also wanted to play around with Victorian England, which is one of my favorite settings (from shows like Black Butler and Penny Dreadful). I was interested in exploring the mythology of my own heritage after reading Girl Giant and the Monkey King by Van Hoang, a contemporary fantasy about Vietnamese mythology.

What were the most rewarding and challenging parts of writing this book?

The most rewarding part came after writing it: when people tell me that they feel seen and understood after reading my book. I’ve heard this from other mixed-race Asian readers, as well as Asian American and adopted readers.

The most challenging part was writing the romance. I find it much easier to write about ghosts and demons than people flirting with each other. That aspect took quite a lot of guidance from my editor to get right, though I think I’m getting better at it!

The most rewarding part came after writing it: when people tell me that they feel seen and understood after reading my book.

Did any library and information science classes influence you during the writing process?

When I was taking a preservation class (LIS439) I became very interested in paper production and ended up writing characters who were ancient Chinese papermakers into my next book. I think anything that piques a writer’s interest is probably going to show up in their fiction in some way, and for me, my preservation class really takes the cake. It’s so satisfying to learn about how different objects are made, and all the different factors to take into consideration when caring for them. I love having that kind of specialized, practical knowledge. I would love to take classes on preserving photographs or moving images, and I hope to do more preservation work in my future jobs.

What are your future plans?

I hope to work in archives and write fiction outside of work. If I could spend my days caring for very old books, then go home and write new books — that would be my dream. 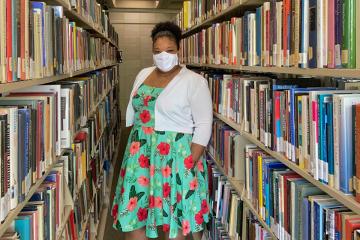