Barrooms and establishments where people gather to drink are integral parts of our community but often aren’t acknowledged as such. Countless friendships, relationships, business partnerships, and personal connections have begun in these locations, but there is a lack of official documentation.

I grew up in Easthampton, Massachusetts, a town built on industry — similar to other Massachusetts-planned cities like Lawrence, Lowell, or Holyoke. My family is six generations deep in the community, and the vast majority of them (including my father) spent their lives working in the mills in town. I’ve always been interested in learning more about the lives of those who came before and those who worked so hard for little financial reward.

When I was in school, I worked as a bartender in Easthampton at a working-class neighborhood bar. I stayed employed there on a part-time basis for nearly 20 years, long after earning my degree and beginning my professional career. The skills I learned as a bartender have translated to my professional work — how to think on my toes, how to be empathetic to those who needed an ear for the evening, and how to be pleasant, even when faced with individuals who may not necessarily be pleasant to me. I hope that our School of Library and Information Science students who have worked in the retail or service industries understand that this background will be a tremendous asset to them going forward.

In the library science world, we often talk about “third places” in people’s lives — people go to work and go home, but there should be an additional space or spaces where people spend their time. Places like parks (I also sit on the City’s Parks and Recreation Commission) and libraries enrich people’s lives.

The classic neighborhood corner bar has also historically been one of those “third places.” However, it’s a bit more challenging to document, as its story exists outside of traditional histories. Barrooms and establishments where people gather to drink are integral parts of our community but often aren’t acknowledged as such. Countless friendships, relationships, business partnerships, and personal connections have begun in these locations, but there is a lack of official documentation. This project is our effort, in conjunction with community members, to fill that void.

Doing this research has also provided me an opportunity to connect with a family member I never met.

My collaborator, Henry Amistadi, and I have embarked on a research project to give voice to those working-class individuals who spent time in these spaces and celebrate the good times and relationships made in these barrooms. It seems logical to combine my current professional work in the information world with my background working in the local barroom culture. I spent a lot of time in the local history sections of the Emily Williston Library in Easthampton and the Forbes Library in Northampton. One of the most time-intensive elements of the research process was going through the town’s annual street listings, dating back to 1900. This enabled us to put together what we believe is a comprehensive timeline of all of the saloons, cafes, and barrooms that existed in the City since before Prohibition.

From there, we put out a call on a few community-based pages on social media, announcing our project’s intent and if anyone had photographs, ephemera, or general items from any of the barrooms in town, with a strong emphasis on places which are no longer in existence. A number of individuals responded, and we have conducted several interviews. People have been happy to share their experiences as well as any photographs they have.

It seems like much of what has been written about barroom culture focuses on establishments in major cities, so researching a small, rural factory town has been a unique experience. We are still in the process of compiling our research (a bit more challenging due to the pandemic), but the ultimate product will be a printed book to be released in 2021. And we have been fortunate enough to have received a grant from Easthampton City Arts+ to help defray some of the production costs.

Doing this research has also provided me an opportunity to connect with a family member I never met. My great grandfather was apparently a legendary bartender in town during the immediate post-prohibition years of the 1930s and 1940s. I’ve found many photos of him working that have been really great to discover. 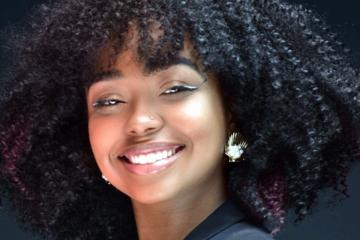 Michelle Musoké '19 shares the three key skills she honed while at Simmons, and how the School of Business set her up for success when navigating the job market.

Meet Dawna Thomas, Professor and Chair of the Sociology Department! Find out why she dedicates her research to her Cape Verdean and African American cultural roots, and learn more about the new Department of Critical Race, Gender, and Cultural Studies.