Our efforts cast a new light on the importance of the people who work in libraries, fighting for them instead of just the concept of a library.

“I think there is an idea — both within the field and reflected by the media — that libraries are staffed by magical elves who make everything available to people,” says Callan Bignoli ’12MS, Library Director at Olin College of Engineering. “I hope we can collectively steer away from that narrative. It minimizes the labor of what we do and denies the material realities of safety, health, and well-being.”

Bignoli has been vocal in her support of library workers throughout the pandemic, and her #ProtectLibraryWorkers campaign received local and national attention. In early 2020, Bignoli and fellow advocates launched Protect Library Workers, a website offering advocacy strategies, resources for re-opening libraries safely, and tracking lay-offs and furloughs in libraries across the Commonwealth. “Our efforts cast a new light on the importance of the people who work in libraries, fighting for them instead of just the concept of a library.”

Bignoli has been involved in other advocacy efforts over the years, mostly in Massachusetts, and typically focused on technology and privacy issues. When businesses closed across the country in response to the pandemic, she noted the pressures library workers faced to continue operation. “The professional associations were doing almost nothing to recognize how incredibly difficult this was for library workers,” especially early in 2020 when so much about the transmittal of COVID-19 was unknown.

We need to develop community safeguards and best practices for how we may help each other through this again.

Bignoli joined forces with others through the New England Radical Reference Collective to push for the closure of the Boston Public Library, which was still requiring workers to work on site in March of 2020. “[NE Radical Reference] is a vocal group on Twitter, and that built momentum. We were a ragtag gang of misfits, not a professional association with membership or clout. But we had a lot of success.” The spread of the #CloseTheLibraries campaign urged the BPL and other libraries to shut down to protect its workers and the community at large.

Since then, Bignoli has circulated Change.org petitions for safer working conditions for library workers. Though the last major push was not successful (to get library workers primary vaccine access in Massachusetts), the group’s activity on social media allowed public library workers to reach out to colleagues who cared.

“People were worried about doing advocacy themselves, for fear of retaliation,” Bignoli notes. “They would ask if we were willing to write letters or call someone on their behalf. As an academic librarian, I can engage in advocacy more freely than a state or public librarian.”

In May 2020, Bignoli organized a free online conference, #LIBREV(olution), which has since turned into the LIBREV online community via Slack. The conference featured six speakers focused on advocating for personal well-being. “We need an infrastructure to help people when a crisis like this happens again,” she says, noting the lack of preparation or guidance from larger associations. “We need to develop community safeguards and best practices for how we may help each other through this again. And it’s on us to do so — we can’t wait for ALA or state associations to step in and do the work.”

While most of her work was focused on issues that arose during the pandemic, it points to a long-existent problem. “Library workers are not prioritized by their institutions,” states Bignoli.

“Anyone who feels comfortable, willing, and has the bandwidth for advocacy should get involved,” she urges, “but I know it's a risk and commitment that not all folks may be able to take part in.” Bignoli suggests developing communities of practice around topics of interest in the field. “Any controversial topic can be more palatable to discuss as a group. Build solidarity between library types across the country, so we have each other to rely on.”

She admits that advocacy work can be time-consuming and rarely sparks immediate change, but the work is critical. “We need to keep building on it — that’s what is important. We need folks thinking of labor conditions and why libraries — and library workers — are so important to their communities.”

This award recognizes the work Whitworth has done within NHSLMA, mentoring new librarians, serving on committees, and supporting initiatives. We spoke with Whitworth about her work at Dover High School and how she's working to diversify the collection. 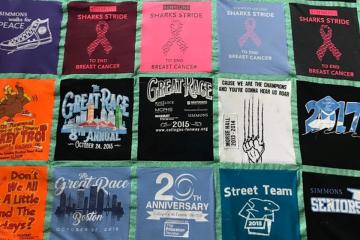 As a Workday consultant at Huron, Bethanie Royality-Lindman '17 gets to explore different areas of financial mathematics, from financial accounting to budgets, expenses, and data conversion. Learn how her Simmons journey prepared her for this role. 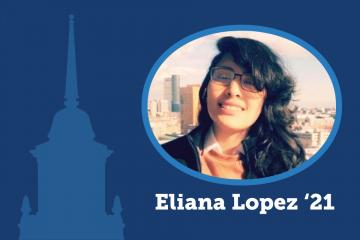 After completing a competitive fellowship program with Hack.Diversity, Eliana was matched as a Software Engineering Intern with Boston-based start-up, Owl Labs, creators of the “Meeting Owl,” one of TIME's 100 Best Inventions of 2020!