Living in an Expanded Occupancy Triple 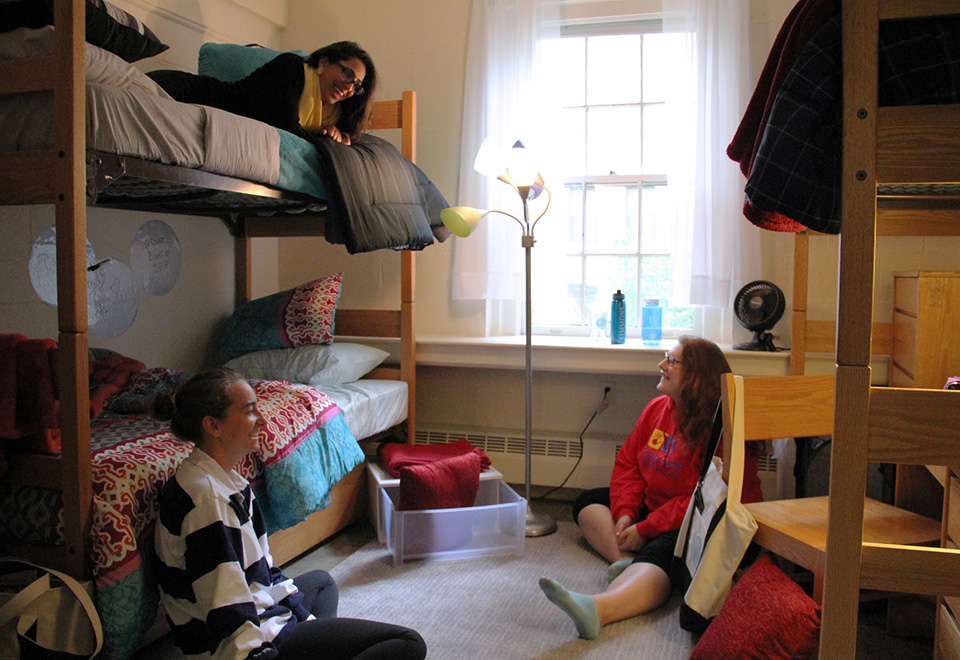 What will an Expanded Occupancy Triple (EOT) room look like?

An Expanded Occupancy Triple is comparable in size to the largest double rooms available. Because each residence hall is unique, the look and style of each room differs. Each room will have three beds, two desks, two chairs, and a combination of storage spaces, which could include a dresser, underbed storage, and/or closet. Students may share closet space. Our staff has worked together to determine the optimal arrangement for furniture usage in Expanded Occupancy Triple rooms. Storage space is limited and it's best to coordinate who will be bringing what in order to avoid having two or three of everything (the most obvious example is a refrigerator).

How was I assigned to an Expanded Occupancy Triple room?

Students have been given the following incentive to opt into Expanded Occupancy Triple rooms:

If space becomes available, students living in Expanded Occupancy Triples will be offered the chance to move. Please note that open bed spaces and the ability to move are limited during the Fall semester.

What are the benefits of living in an Expanded Occupancy Triple?

All occupants of an Expanded Occupancy Triple will receive a $750 refund on housing costs, if they have not been offered the opportunity to de-triple by October 24, 2022.

Expanded Occupancy Triple rooms were all evaluated to ensure that the school furnishings would fit in the available space. We recommend not bringing additional furniture to allow yourself the maximum usable space.

Storage space is limited to the shared closets, dressers, and/or underbed storage, so we recommend bringing only what you need. If Simmons isn't far from home, bring what you need for one season at a time. Target is within walking distance and many other popular stores are T accessible; consider postponing purchases of non-essential items until after you've arrived and assessed the space. The college bookstore will also be open during opening weekend and will have popular items for purchase. We recommend getting in touch with your roommates before move-in, not only to introduce yourself but also to talk about who is bringing large items such a fridge, ironing board etc, to avoid duplicates. Our Xfinity OnCampus system allows for streaming of all shows through devices such as computers, phones, or tablets. Most of our students forgo packing a TV. However, if you do choose to bring a TV, a Roku box will be needed to stream Xfinity to the TV or your TV can be connected via HDMI cord to your laptop.

Furniture included in an Expanded Occupancy Triple cannot be relocated or removed, even if the EOT is not fully occupied by 3 residents. Residents are not permitted to relocate or request relocation of the furniture. If a vacancy occurs within an EOT no resident may move into the space without written permission from the professional staff of the Office of Residence Life. If an unauthorized room change occurs or if furniture is removed residents may be referred to the Student Conduct process.

As a reminder, residents are not allowed to move without written authorization from the Office of Residence Life according to the Community Standards.