Attend a conversation on systematic oppression and next steps

Join the Office of Organizational Culture, Inclusion & Equity and MPH Health Equity for a conversation with Dr. Camara Phyllis Jones on activism, systemic oppression and next steps.

Please register in advance for this important conversation. 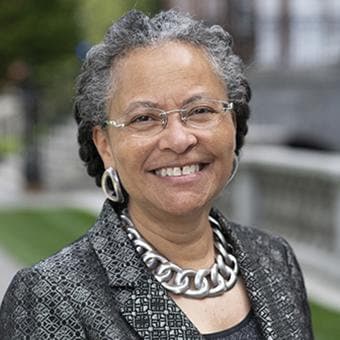 Camara Phyllis Jones, MD, MPH, PhD is a 2019-2020 Radcliffe Fellow at the Radcliffe Institute for Advanced Study at Harvard University. She is a Past President of the American Public Health Association (2015-2016) and a Senior Fellow at the Satcher Health Leadership Institute and the Cardiovascular Research Institute at the Morehouse School of Medicine. Dr. Jones is a family physician and epidemiologist whose work focuses on the impacts of racism on the health and well-being of the nation. She seeks to broaden the national health debate to include not only universal access to high quality health care, but also attention to the social determinants of health (including poverty) and the social determinants of equity (including racism).

As a methodologist, she has developed new methods for comparing full distributions of data, rather than simply comparing means or proportions, in order to investigate population-level risk factors and propose population-level interventions. As a social epidemiologist, her work on "race"-associated differences in health outcomes goes beyond documenting those differences to vigorously investigate the structural causes of the differences. As a teacher, her allegories on "race" and racism illuminate topics that are otherwise difficult for many Americans to understand or discuss. She hopes through her work to initiate a national conversation on racism that will eventually lead to a National Campaign Against Racism.

Lauded for her compelling clarity on issues of “race” and racism, Jones is an American physician, epidemiologist, and civil rights activist who specializes in the effects of racism and social inequalities on personal health. Jones has also previously worked as an Assistant Professor at Harvard School of Public Health (1994-2000) and Medical Officer and Research Director on Social Determinants of Health and Equity for the Center for Disease Control and Prevention (2000-2014). Jones is known for her contributions to critical race theory and her work in defining institutional racism, personally mediated racism, and internalized racism in the context of modern U.S. race relations using the gardener's tale.