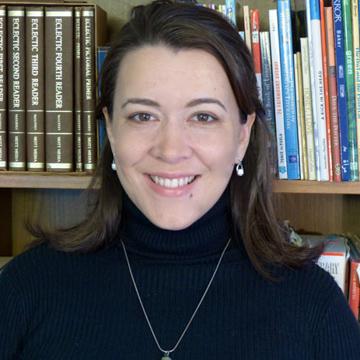 Megan Dowd Lambert holds an MA in Children's Literature from Simmons University (2002) and received her BA from Smith College (1996), double majoring in Government and African American Studies. She is a full-time Senior Lecturer in Children's Literature at Simmons, teaching the undergraduate Survey of Children's and YA Literature as well as courses in the graduate programs in Boston and at The Eric Carle Museum of Picture Book Art in Amherst, MA. She also coordinates mentorships for MFA students in the program. She has also served as a Visiting Lecturer in the English Department at Mt. Holyoke College, the School of Education at Boston University, and at several other schools throughout the northeast.

For nearly ten years Megan worked in the Education Department at The Carle. This work began in the fall of 2001, a year before The Carle opened, when Megan earned the final four credits of her MA in Children's Literature at Simmons by conducting an Independent Study that was the genesis of her development of the Whole Book Approach and A Book in Hand, two interactive story time models designed to engage children with picture book art and design. This work evolved into professional development programs and outreach work with schools and libraries in which Megan reached over 25,000 participants during her tenure at The Carle. In 2009 she was named a Massachusetts Literacy Champion by the Mass Literacy in recognition of this work.

Megan is a frequent speaker at conferences and provides professional development training for teachers, librarians, and others who work with children and books. A guest reviewer and regular contributor to The Horn Book Magazine's "Books in the Home" column, Megan is also a reviewer for Kirkus Reviews, and her writing has appeared in numerous other journals including Children & Libraries, Bookbird Magazine, Riverbank Review, CREArTA, The Five Owls, Children's Literature, and The Children's Literature Quarterly. She served on the 2009 Geisel Committee, the 2011 Caldecott Committee, and the 2012 Boston Globe Horn Book Award Committee. Her first picturebook, A Crow of His Own, will be published by Charlesbridge Publishing in 2015 with illustrations by David Hyde Costello, and Charlesbridge will also publish her forthcoming professional title, Storytime Stories: The Whole Book Approach to Reading Picture Books with Children that year. A third title, Real Sisters Pretend, is under contract as a picture book with Tilbury House Publishers.

Research interests through the Whole Book Approach focus on structuralist and reader response criticism of the picturebook, with particular attention to children's responses to picturebook paratexts in shared reading transactions.

I'm currently working with Routeledge Publishers to contribute a chapter on "Layout of Picturebooks" in the planned Routeledge Companion to Picturebooks, edited by Dr. Bettina Kümmerling-Meibauer. Expected publication date 2016.

My reviewing work focuses primarily on picturebooks and beginning readers.

Writing fiction and personal essays is becoming increasingly important in my work. In addition to having two picturebooks under contract, I have several works in progress, including two picturebook texts (one is a potential sequel to A Crow of His Own) and an early chapter book.

I am also working on more essays for The Horn Book Magazine's "Books in the Home" column, and I'd like to see these collected into a single volume, someday. To date, I've published:

"Gutter Talk and More: Picturebook Paratexts, Illustration and Design at Storytime" in the Winter 2010 edition of Children & Libraries.

"Reading about Families in My Family" included in the book, A Family of Readers, edited by Roger Sutton and Martha Parravano, Candlewick Press, 2010.

Contributions to The Public Humanist, an online blog journal of the Massachusetts Foundation for the Humanities. Postings to date include:

Review of The Annotated Cat: Under the Hats of Seuss and His Cats: Introduction and Annotations by Philip Nel in The Children's Literature Association Quarterly Summer 2008 Vol. 33 #2.

The Horn Book Guide, 6 published reviews in the Spring 2006 edition.

Review of Song of the Water Boatman in Vol. 18 Issue 4 of The Five Owls.

"Books to Make Children's Eyes Dance across the Pages: Music and Children's Literature" with an annotated bibliography, in the online Vol. 18 Issue 3 edition of The Five Owls.

Review of Kaethe Zemach's Just Enough and Not Too Much online Vol. 18 Issue 2 edition of The Five Owls.

"Paint That Funky Music White Boy: The Jazz Picture Books of Chris Raschka" in Vol. 3 No. 2 Southern Summer 2002/2003 edition of CREArTA; same paper presented at the June 2003 conference of the Children's Literature Association in El Paso, Texas and at the spring meeting of the Pioneer Valley Reading Council on November 6, 2003.